Over the last decade Rodney Meldrum has been heavily promoting his Heartland Theory, which argues that the epicentre of Book of Mormon civilisations was the Ohio Valley of North America. The principal, and most controversial, claim made by Meldrum is that the mitochondrial X2a lineage found among a small percentage of Native North American tribes is derived from Israel, and was brought to the Americas by ancient maritime Jews. The Heartland model has rapidly established itself as arguably the most popular model of where Book of Mormon events occurred.

A report in the June 18th 2015 issue of Nature has dealt a heavy blow to the foundational DNA claims of Meldrum's Heartland movement. The genomic study published in Nature by Rasmussen and others has revealed one of the most famous and ancient Paleoindian skeletons, known as Kennewick Man, has mitochondrial DNA belonging to lineage X2a. More importantly, Kennewick Man lived in what is now Washington state about 9,000 years ago; meaning X2a DNA did not arrive with recent Jewish sailors.

These are three key lines of evidence that conclusively show the X2a lineage has nothing to do with Hebrew migrations to the Americas.

1. The X2a lineage has been found in one of the oldest Native American skeletons ever discovered. Data from a range of scientific fields shows this individual lived about 9,000 years ago, pre-dating the Jaredite arrival by about 5,000 years.

2. The X2a mitochondrial DNA lineage of this individual is directly ancestral to all other X2a lineages found among contemporary or ancient Native Americans.

3. There is a diverse family tree of Native American X2a lineages that descend from a common ancestor. The amount of variation in that family tree is about the same as is found in each of the A, B, C and D lineage family trees.

These three lines of evidence confirm the X2a lineage has been present in the New World for about 15,000 years.

Kennewick Man is the name given to the skeletal remains of a prehistoric Paleoamerican male found on the banks of the Columbia River in Kennewick, Washington, in 1996. It is one of the most complete ancient skeletons ever found. The discovery of the remains led to considerable controversy. Local Native American tribes wanted the remains returned to them for reburial. However, anthropological analysis of the skull showed it to be unlike contemporary American Indians and Europeans. Detailed study of the ancient skeleton commenced after a court ruling in 2004 gave access to the skeleton for scientists.

Few Native Americans remains have been as intensively studied as Kennewick Man. Radiocarbon tests on Kennewick Man bone fragments have shown it to date from 8.9k to 9k cal years before present. However, a wide variety of other scientific information supports the conclusion that Kennewick Man lived well over 7,000 years ago.


“Geomorphologic and sedimentary investigations of the river bank near the discovery site (Wakeley et al. 1998; Huckleberry et al. 1998) indicate that sediment layers consistent with these dates exist in the alluvial terrace where we believe the remains were buried originally. The documentation, examination, and analysis of the skeletal remains themselves (Powell and Rose 1999) suggest a pre-Columbian context for the remains. Comparison of sediments adhering to the skeletal remains and sediments from the river bank profile are consistent with the skeletal remains having been buried in sediments stratigraphically dated pre-7000 BP (Huckleberry and Stein 1999). Information from the analysis of the lithic artifact lodged in the ilium of the skeletal remains also is consistent with an ancient date for the remains themselves (Fagan 1999). In all, information derived using the methods and techniques of archeology, geomorphology, physical anthropology, sedimentology, and other scientific disciplines support this determination.”
Letter from Donald Barry, Secretary of the Interior, 1/11/2000

Scientists studying the ancestry of Native American populations have focussed most of their attention on mitochondrial DNA. The majority of our DNA (carried on our chromosomes) is passed from generation to generation as complex rearrangements of parental DNA. In contrast mitochondrial DNA (mtDNA) remains largely intact and is passed along maternal lines from mothers to their offspring. Over the years unique mutations in the mtDNA sequence accumulate in separated populations, leading to a branching tree of mtDNA lineages. Closely related populations share many of these mutations while distantly related populations have many more differences in their mtDNA sequences.

The earliest immigrants to the Americas brought with them a subset of the DNA present in their Asian source populations. Mitochondrial DNA variation in the Americas indicates unambiguously that the ancestors of Native Americans originated in Asia. Virtually all modern Native Americans possess an mtDNA lineage that belongs to one of five founding lineage families or haplogroups. These maternal lineages have now been designated A, B, C, D and X. Of these haplogroups, only X is found in European populations; however, the X haplogroup is large and diverse, and the particular X lineage found in Native American populations (the X2a lineage) represents a distinct branch on the Eurasian X lineage tree. 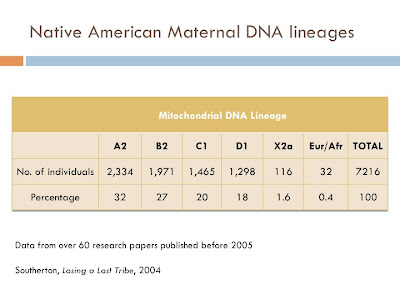 The X lineage haplogroup is an ancient and highly divergent mitochondrial DNA lineage family. It is divided into two subgroups, X1 and X2, which diverged about 30,000 years ago. Subgroup X1 is rare, and restricted to Africa and the Near East. Subgroup X2 is more common in the Near East, the Caucasus, and Mediterranean Europe.

Within the X2 subgroup there are distinct subclades that are found in particular populations. Subclades X2a and X2g are found exclusively in North America, and have not been observed in Eurasia, Mesoamerica or South America. Likewise, subclades X2b, X2c, X2d, X2e and X2f are absent in the New World but present in Eurasia. The tree below is based on a comprehensive database of entire mitochondrial genome sequences which can be accessed at the phylotree.org website. 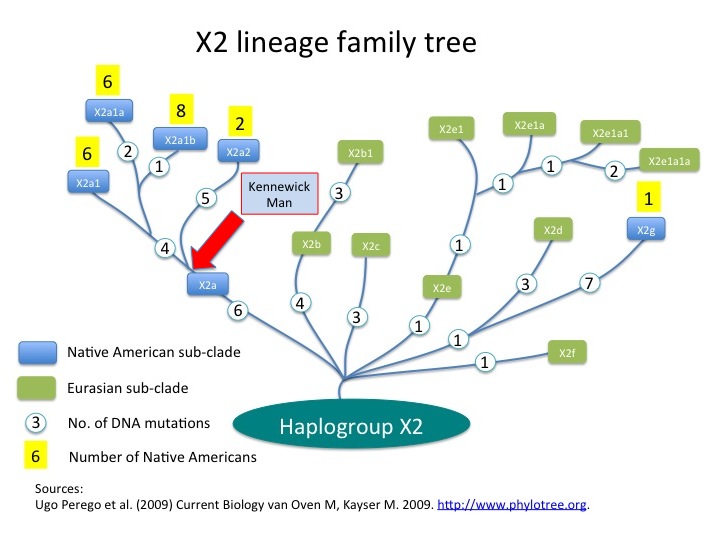 The circled numbers in the tree indicate the number of DNA sequence changes (or mutations) that are found between adjacent lineages on a particular branch. All but one Native American X2 lineage belongs to the X2a subclade, the other belongs to the rare X2g subclade. All X2a lineages share 6 mutations that distinguish them from all other X2 lineages.

The position of Kennewick Man's X2a lineage in the family tree is indicated by the red arrow. He carries the 6 DNA mutations that distinguish Native American X2a lineages from all other X lineages. But he doesn't carry any of the newer mutations that have occurred over thousands of years since he lived. This is consistent with Kennewick Man living before all existing Native American X2a lineages diverged from each other many thousands of years ago.

We already know how Rodney Meldrum will respond to the devastating evidence in the Nature study. Meldrum will dismiss the 9,000-year-old radiocarbon age because it doesn't fit with his already fixed conclusions about the age of the earth. This is because Meldrum is a young earth creationist. Rodney knows the earth is roughly 6,000 years old, the Flood killed most living things about 4,500 years ago and all continents were colonised by the descendants of Noah within the last 4,000 years.

However, Meldrum isn't prepared to completely rule out carbon-dating when it suits his purposes. He has previously used radiocarbon data that proves the X lineage was in the Americas prior to the arrival of Columbus. This is because that evidence helps prove the X lineage arrived in the Americas before Columbus, a fact that is necessary for his X claims to be valid.


But Meldrum doesn't like radiocarbon dates that pre-date his scripture-based fixed beliefs. This is Meldrum's response to questions about the DNA lineage work done on the remains of "On Your Knees Cave Man" from Alaska, which were carbon-dated to 10,300 years ago.

"Carbon dates going back to about the time of Noah’s flood are generally relatively accurate depending on many parameters, but the dating pre-flood is problematic because of the disturbance in the global C14/C13 ratio’s at that time. The same goes with the Canadian dating of 5,000 year old remains."— Rodney Meldrum, TheFamily.com

In Meldrum's view carbon dating is accurate within the last few thousand years because he can use that to support his predetermined X lineage claims but the moment it is used to date material that doesn't fit within his creationist, 4,500-year, post-flood timescale its reliability disappears completely. Scientist know that C14/C13 ratios have changed historically, but because we have anchored tree ring carbon dates we know pretty much exactly how much those ratios have changed and when they have changed. The ratio changes are related to fluctuations in the earth's magnetic field and they generally affect the accuracy by much less than 10%. They have nothing to do with imaginary global flood events.

Meldrum is equally dismissive of mainstream views about how the Americas were colonized. There is a broad consensus view among archaeologists, geologists and biologists that the ancestors of Native Americans entered the New World via a wide expanse of land—called Beringia—which connected Asia with North America during ice ages when sea levels were lower. In Meldrum's mind this is just conjecture and is wrong because it doesn't fit with what Mormon scripture says.

"First, the Book of Mormon does not describe an overland migration into the Americas from Asia, but rather a transoceanic voyage from the Mediterranean area. Second, Lehi’s lineage stems from the descendants of Noah’s son Shem, and not Japheth, the father of the Asiatic peoples."
— Rodney Meldrum, Rediscovering the Book of Mormon Remnant through DNA, Page 7

The discovery of an ancestral X2a lineage in a Paleoindian skeleton lays waste to a central claim of the Heartland theory. Kennewick Man lived 9,000 years ago on the other side of the Rockies, thousands of miles away from the Ohio valley where the Heartland theory is centred. This finding conclusively proves the X2a lineage was present in the Americas at least 5,000 years before the Book of Mormon period.

If the Heartland apologists are going to continue in the business of using science to back up their religious beliefs, they need to do better. You cannot  use your religion's scriptures as evidence that the science is wrong. You might as well use your scripture to prove your scriptures true. It offends believers who are honest seekers of all truth and  scientists who are drawing the most plausible conclusions from the discoveries they make.

Posted by Simon Southerton at 19:01