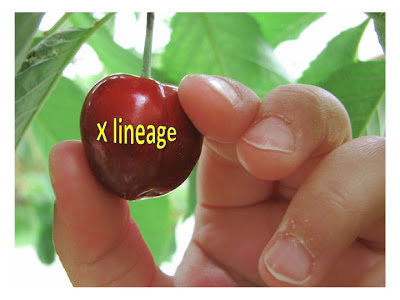 Rodney Meldrum recently published a book Rediscovering the Book of Mormon Remnant through DNA. In this book he promotes the idea that the X haplogroup, a rare DNA lineage found among Native Americans, may be evidence of Israelite DNA in New World populations, a claim that supports the Book of Mormon. Rodney's book can be purchased at his website. Accompanying the book are these especially bold claims:

"Not since the long-lost Joseph Smith papyri burst upon the scene in 1967 has there been news of this magnitude and import regarding the physical corroboration of Latter-day Saint doctrine and scripture." said Ed Lauritsen, Ph.D. This is the book that many have been awaiting for their further study of the genetic evidences that supports the truthfulness of the Book of Mormon and the prophetic calling of the Joseph Smith.”
—The Firm Foundation

Jake Hilton, the Youth Educational Instructor of the FIRM Foundation, recently stated "What makes Haplogroup X2 DNA so significant is that it is only found in one other location on the planet: Among Jewish populations of Europe and the Middle East".

Attempts to link New World X lineages with Israelite populations that existed just 2,600 years ago are problematic. They miss the mark by about 30,000 years. The source of the X lineages found among Native Americans is most likely Asia, just like the four major female DNA lineages.

Not long after scientists first began studying the DNA lineages on Native Americans it was observed that a significant number of individuals in populations in Alaska, Canada, and northeastern North America, had female DNA lineages that are distantly related to the four main founding lineages (A, B, C & D). Originally it was thought that these new lineages might have been introduced after the arrival of Columbus, but when researchers looked closer, they found that most of them came from a fifth, though minor, founding line now known as the X lineage. It occurs at the highest frequency (about 25%) in several tribes in the northeastern part of North America (Brown et al. 1998) and at lower frequencies throughout the remainder of North America (Smith et al. 1999). About 2.5 percent of New World Native Americans have a mitochondrial DNA belonging to the X lineage family.

Several LDS scholars have claimed that the presence of the X lineage among Native Americans suggests a recent genetic link with the Middle East. Michael Quinn claimed in Sunstone Magazine that 7% of the DNA collected from indigenous peoples of the Western Hemisphere matched DNA collected from North Africa and the Middle East. FARMS apologist John Tvedtnes has also claimed the X lineage is evidence on a Middle Eastern connection, however FAIR and other writers for the Maxwell Institute at BYU have distanced themselves from this claim.

There are several problems associated with attempting to link the X lineage to Book of Mormon peoples. Currently the major challenge is the considerable degree of genetic variation that has been observed among New World X lineages (Brown et al. 1998). This would not be expected if the lineage family had arrived as recently as 2,600 years ago. Scientists can use the amount of variation in a DNA lineage family to estimate the time to the most recent common ancestor of that family. They are able to do this because new DNA mutations in individuals in large populations tend to occur at a relatively constant rate. By counting the number of new mutations in a lineage family scientists can estimate how long the lineage family has existed. The table below shows the age estimates for the 5 founding lineages of Native Americans. 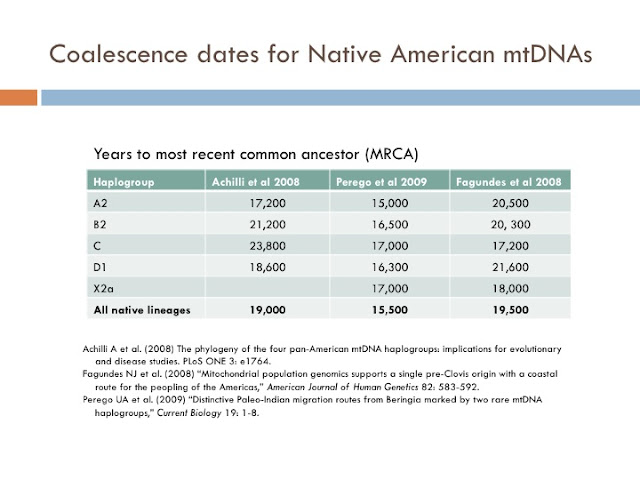 The degree of variation in the X lineage family is about the same as the other 4 lineages, strongly suggesting that the X lineage was present in the first Americans and accompanied the other four founding lineages across the ancient land bridge. The data strongly suggests that all Native American mtDNA lineages have a most recent common ancestor that lived at, or soon after, the last glacial maximum (Figure 3.1). This is also strong evidence that all five Native American mtDNA lineages arrived in the New World at the same time. The separation between New World and European X lineages is estimated to have taken place even farther back in time, over 22,000 years ago (Reidla et al. 2003). 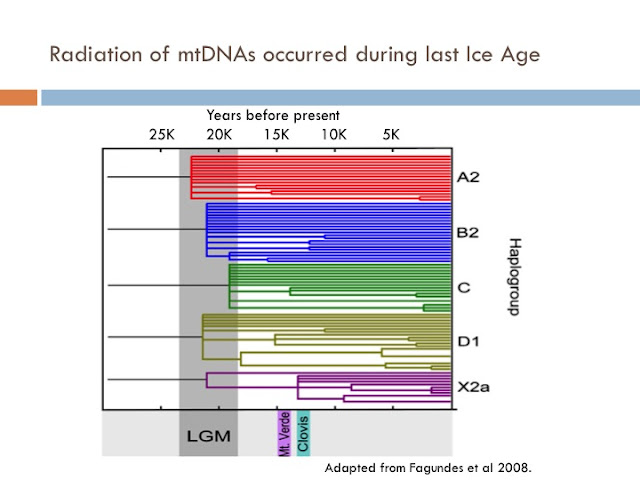 The confusion over the X lineage has arisen because in contrast to the other four founding lineages of Native Americans, it is an ancient and highly diverged mtDNA lineage family. It has recently been divided into two sub-groups, X1 and X2, which diverged about 30,000 years ago. Sub-group X1 is rare, and restricted to North and East Africa, and the Near East. Sub-group X2 appears to have expanded its distribution soon after the last glacial maximum (LGM) about 21,000 years ago, reaching far into Eurasia and the New World. It is more common in the Near East, the Caucasus, and Mediterranean Europe; and somewhat less common in the rest of Europe. Within each sub group there are distinct sub-clades that are found in particular populations. Subclades X2a and X2g are found in North America, but are not present in Eurasia, Mesoamerica or South America (See Table 3.2). 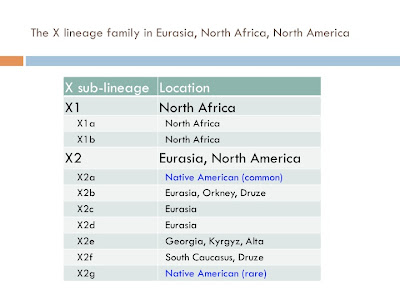 The highest frequency of the X lineage has been found in the Israeli Druze community (27%). LDS apologist Rodney Meldrum has claimed that this is evidence that Israelites (close relatives of the Druze) may be ancestors of American Indians from eastern North America. However, the X2a lineage is not found in the Druze population. 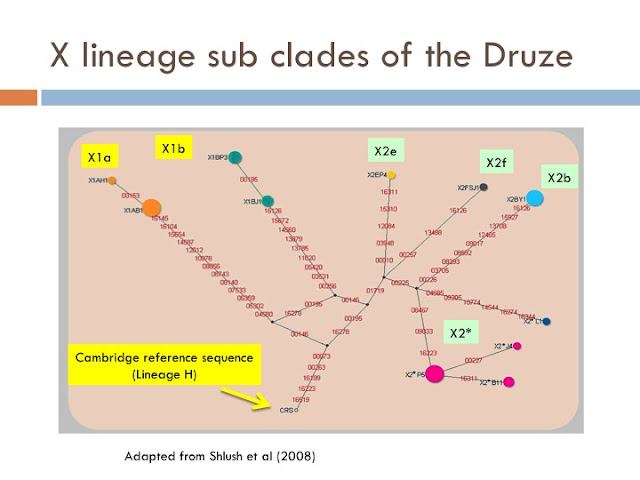 I recently questioned Rodney Meldrum’s claims that the presence of the X lineage in Native Americans represents a genetic link with Israel in light of the evidence I described above. He responded saying:


“…I have read Ugo Perego's paper in Current Biology … and understand where he is coming from, although when it comes to the dating, I am in disagreement with him based on scriptural timelines as I understand them.”

“My impression is that you believe I am 'cherry-picking' evidence I like and rejecting out of hand all other information. Simon, this is not the case. I am rejecting portions of theories that I feel cannot be reconsiled (sic) with the revealed word of the Lord in the scriptures.”

Ugo Perego is a Mormon scientist who has published several important papers on the molecular genealogy of Native Americans. Perego disagrees with the way Meldrum has interpreted his research findings. Like all other experts in the field Perego doesn't believe that the X lineage arrived recently in the Americas. In spite of his claim that he isn’t, Rodney Meldrum (who is not a scientist) is most definitely cherry picking the scientific evidence. Consider these words in the introduction to Rodney's book.

"My position as the author of this work is that when there is an inferred conflict between scientific theories and scriptural truths, the scriptures will always be demonstrated true, and the theories of men, put forward through science, will eventually conform to the truths of the gospel, not the other way around. Of course error can be made in the interpretation of scripture; however when they (the Scriptures) are clear and supported by prophetic or revelatory understanding, and if they cannot be reconciled with the current theories of science, then it should be understood that eventually the scientific theories will be altered to comply with God’s truth, even if that means waiting until the next life. The theories (beliefs) of men that don’t harmonize with the truths (facts) of God are in error and are subject to alteration."

Here, Meldrum admits that his conclusion is fixed from the outset. He is merely gathering facts that suite his purposes. Anyone with these views in mind will think they have full license to dismiss out of hand any scientific ideas that challenge their beliefs. Meldrum uses DNA evidence he likes (X lineage present in Old and New World) and ignores evidence he dislikes (New World X2a lineages pre-date the existence of Israel by about 25,000 years) because it doesn’t fit his already fixed faith-based views.

Further evidence that New World X lineages are not derived from Israel comes from studies of ancient DNA. Currently, the earliest confirmed discovery of the X lineage in pre-Columbian Native American remains comes from a 1,340-year-old burial site on the Columbia River near Vantage, Washington (Malhi and Smith 2002). There are reports of the presence of the X lineage in more ancient remains but to date these are not conclusive. However there is considerable work being done on ancient remains at present and it is only a matter of time before the X lineage will be confirmed to have been present in America before the Book of Mormon period.

In 2010 Rodney Meldrum appeared in a new DVD documentary Lost Civilizations of North America where he promoted his flawed X lineage theories. The documentary was produced by Mormons and is clearly intended to give scientific credibility to Meldrum's theories by including several short interviews with respected scientists who have studied North American Indian tribes. Four scientists were so upset by the way they were portrayed in the DVD that they published a three part series of critiques of the DVD.


The third in the series focusses on the DNA evidence and gives an excellent critique of Meldrum's X lineage claims. The scientists conclude that "there is no credible archaeological or genetic evidence to suggest that any Old World peoples migrated to the Americas after the initial incursion from Siberia prior to the tentative forays of the Norse beginning at around 1000 CE other than limited contacts between Siberia and the American arctic".