In 2013 the Foundation for Apologetic Information and Research (FAIR) published a video entitled DNA and the Book of Mormon Explained. The DVD is aimed at defending the flagging Mesoamerican Limited Geography Theory and contains amazing claims by a number of LDS scientists and apologists. The boldest claims in the video are those of Keith Crandall, who joined BYU in 1996 and was baptised in 2004. Crandall was Chair of the BYU Department of Integrative Biology from 2006 until 2012 when he resigned to take up a position at George Washington University in Washington D.C.

Three times in the video Keith Crandall claims Middle Eastern DNA has been found in the Maya.

“The most recent DNA evidence that I’ve seen, in terms of peopling of the Americas, shows this Middle Eastern haplotype at greatest frequencies in the Mayan people; so if that’s your perception of where Lehi and company set up shop then the DNA evidence would be consistent with that.”

"…the fact is, based on this paper by Noah Rosenberg from the University of Michigan that there are in fact Middle Eastern haplotypes in where we as Latter-day Saints would expect them to be; in the Mayan population, as opposed to across all North and South America.

"…there is an interesting bit of data that probably only an LDS scientist would pick up…[chuckle]…which shows for the Mayan people and maybe one or two other cultures close geographically to the Yucatan area…there’s actually a nice infusion of Middle Eastern…what they call Middle Eastern genotypes in those populations."


Crandall also tells viewers the DNA studies are very difficult to understand, and because the critics are not population geneticists like himself, they couldn’t understand the research.


A tricky kind of data

When asked for references to his claims Crandall directs people to two published papers, Li et al. 2008 and Rosenberg et al. 2005). In contrast to earlier studies on mitochondrial DNA, this research was focussed on nuclear DNA variation. In the paper by Li et al. (2008) they studied the nuclear DNA of 938 unrelated individuals from 51 global populations at 650,000 common single-nucleotide polymorphisms (SNPs). SNPs are points in the genome where single base differences occur in the human population.

SNPs are part of the natural genetic variation found within all human populations. In Li's research they  showed that global populations can be clearly distinguished on the basis of the hundreds of thousands of SNPs they carry. This is illustrated in the figure below. 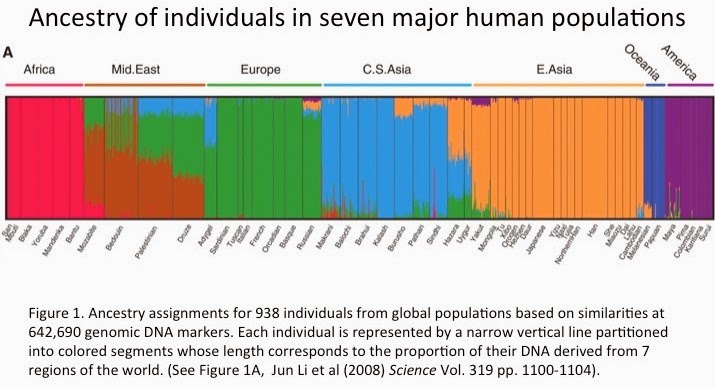 In the above diagram the information from 650,000 SNPs is condensed into a single thin vertical line for each individual. This line has coloured segments whose length corresponds to the proportion of their DNA derived from particular global regions. Individuals are then grouped with other individuals who share similar DNA.

If you focus on the data for the Mayan population, which is expanded in the figure below, you will notice that their ancestry also includes DNA likely to have originated in East Asia (orange) and Europe (green). This is the DNA Crandall interprets as "Middle Eastern genotypes". However, this claim is incorrect, and none of the authors of the papers Crandall cites conclude, as he suggested, that Middle Eastern DNA was found in the Maya. 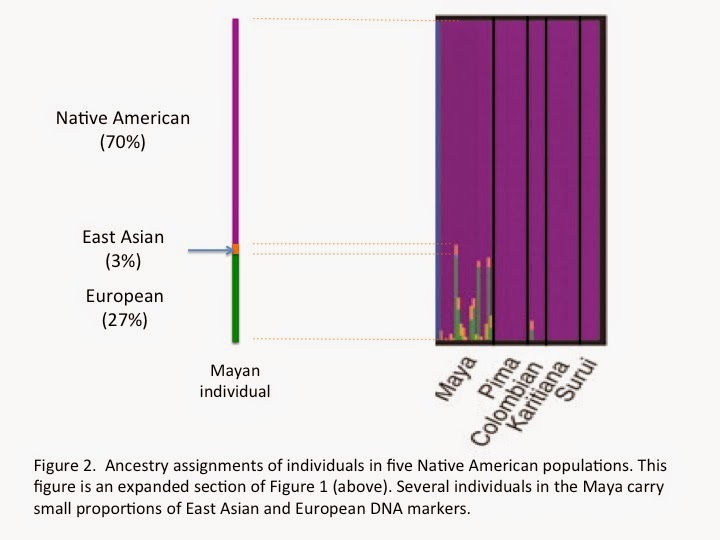 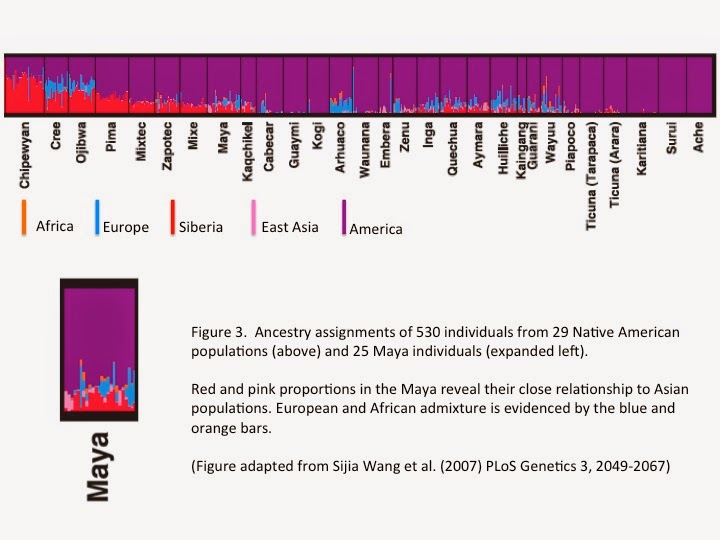 The most likely origin for the European DNA in the Maya is post-Columbus admixture. After Columbus, large numbers of Europeans and Africans migrated to the Americas and many of these early colonists intermarried with indigenous Native Americans. Scientists try to avoid including individuals with this mixed ancestry, but it is especially hard to do this in populations that mixed very early with European and African colonizers.

Admixture in the Maya has since been examined in much more detail in a paper by Hellenthal et al. 2014. Hellenthal tracked the geographical origin of post-Columbian DNA admixture in the Maya to Europe and Africa (see figure below). None of the admixture came from Middle Eastern populations which were included in his study. What is especially telling is the DNA data Hellenthal used was obtained from the same individuals used in the Li et al. (2008) research. This report confirms that Crandall's "Middle Eastern genotypes" are in fact European and African admixture. See my Mesoamerican DNA post for more details on the Hellenthal study.


It appears that in his eagerness to please his FAIR colleagues Keith Crandall saw things in the research that are simply not there. The truth is that scientific research has consistently failed to uncover reliable evidence for the presence of any ancient Hebrews, or their genes, in pre-Columbian Mesoamerica or throughout the New World.