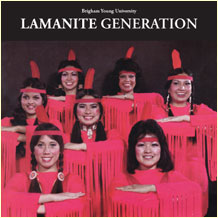 The lack of molecular ties between Native Americans and ancient Israelites has forced many Mormon apologists to resolve their cognitive dissonance by a change of tack. If you can't make the facts fit with scripture then make scripture fit with the facts. It is an uncomfortable fact for Mormons that American Indian DNA is of Asian origin and if there were any Israelites among their ancestors then their Israelite genes appear to have disappeared. Some LDS apologists, desperate to salvage faith at any cost, are arguing that the Lamanite DNA has indeed disappeared. Putting aside the testimony-shattering reinterpretations of scripture this requires, is it true that Lamanite DNA could so easily be lost?


Human population geneticists have made tremendous progress in unravelling the origins of the human family and the routes our ancestors followed as they colonized the globe. Most of this progress has been made by studying the simple genetic configurations of Y chromosome and mitochondrial DNA. Until now scientists have largely ignored the DNA that comprises the vast majority of our genome.  This is the DNA that resides within our remaining 22 pairs of chromosomes, known as the autosomes. Together with the X and Y chromosomes it is known as genomic DNA.

Whole genome studies
Studying our genomic DNA is enormously challenging.  Firstly, there is so much of it.  The human genome contains three billion base pairs of DNA.  Secondly, the pattern of inheritance of genomic DNA is less straightforward.  Unlike Y chromosome DNA, which is passed from generation to generation largely unchanged from father to son, and mitochondrial DNA, which is passed largely unchanged from mothers to daughters, most of our genomic DNA gets shuffled every generation in a process called recombination. 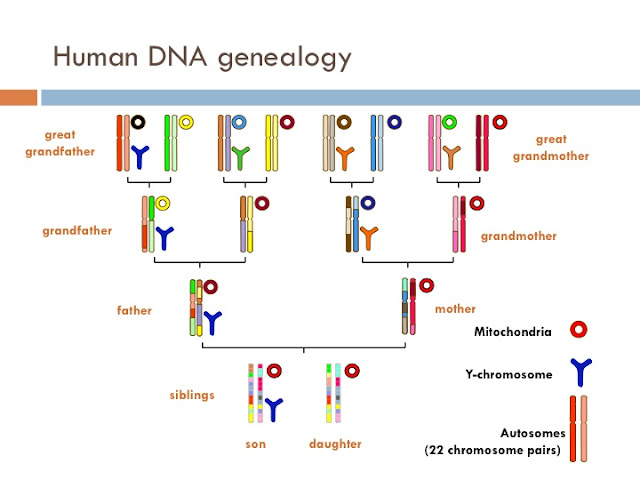 Tremendous advances in DNA technology in the last decade are now making it feasible for scientists to look much further into the human genome to unlock some of the deepest secrets of our ancestors. Most of those secrets are buried in the 3 billion base pairs of DNA in our genome.  But how is it possible to make sense of this vast amount of DNA sequence data? Most scientists studying the human genome focus their attention on what's different between genomes rather than what's the same. That reduces the information they have to deal with by roughly a thousand-fold. By far the most common difference observed when the entire genome sequence of two different people are compared, are single base pair substitutions known as Single Nucleotide Polymorphisms (SNPs, pronounced SNiPs). The word "polymorphism" simply means different forms. The figure below illustrates a G/T SNP. 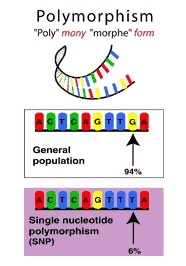 SNPs are random variations that have arisen in a single human genome in the past and then subsequently passed on to future generations (we typically pass on about 50 or so new mutations to our children). Since mutations are arising all the time human tribes that become separated soon begin to accumulate large numbers of SNPs that are unique to their population.

SNPs have revealed some surprises in our family tree
Several ground-breaking discoveries using whole genome SNP analysis have been made in the last few years. It has long been known that humans co-existed in Europe with the closely related Neanderthals (Homo neanderthalensis) about 30-40,000 years ago. Scientists have speculated for many years that humans and Neanderthals may have interbred but the evidence was largely inconclusive. In 2010 German scientists succeeded in isolating DNA from Neanderthal bones and sequencing some of the Neanderthal genome. (The team that made the original discovery has recently published the full genome sequence, making it freely available to the scientific community).

The first things scientists did after sequencing the Neanderthal genome was to look for differences between the Neanderthal and human genomes. This study revealed many thousands of DNA sequence differences, or SNPs, between the two species. They also found that every human who is descended from "non-Africans" has a little Neanderthal in them - between 1 and 4 per cent of their genome. Its now clear that humans and Neanderthals interbred and had healthy offspring. Neanderthals never lived in Africa, which may explain why contemporary sub-Saharan Africans have no trace of Neanderthal DNA in their genomes.


The surprises in our family tree don't stop there. Scientists now believe that our ancestors fraternised with other distant relatives. In 2012 scientists sequenced DNA recovered from a bone fragment found in a cave in the Altai region of Siberia. They discovered the bone belonged to a new species, Denisovans, which are more closely related to Neanderthals than humans. Remarkably, when the Denisovan genome sequence was compared to the genomes of humans from all around the world, it was found that Papua New Guinea highlanders, Melanesians and Australian Aboriginals shared a little (~5%) Denisovan DNA.


The Denisovan discovery fits neatly with widely accepted views of human colonisation of the world. The very first humans to migrate out of Africa travelled around the coast of India, reaching New Guinea and Australia about 50,000 years ago. The two groups are likely to have interbred when they first met and the Denisovans subsequently died out. Who knows what other genealogical surprises are contained within our genomes.

Lamanite DNA: nowhere to hide
The research on Neanderthals and Denisovans clearly illustrates that if ancestors of other ethnic backgrounds are hiding unnoticed in our family trees, traces of their DNA can be found in our genomes; even after tens of thousands of years. It is no longer reasonable to claim that Lamanite DNA cannot be found. The recent advances in whole genome sequencing and analysis have changed the research landscape. Genetic tests are now so sensitive, that it is possible to detect a tiny fraction of a percent of mixed ancestry in a person’s DNA.


Scientists are beginning to explore the origins of Native Americans using what they call Ancestry Informative Markers or AIMs. These are SNPs that have been shown to be specific to a particular indigenous group. In 2007 scientists identified 8,144 AIMs found only in the genomes of the Pima and Maya. They demonstrated that their panel of AIMs can distinguish between chromosomal segments of Amerindian or European ancestry. The goal of their study was to determine the ancestral origins of indigenous diseases, but their conclusions have profound implications for those interested in Book of Mormon studies.

Using ancestry informative SNPs it is possible to estimate how long ago foreign DNA entered a population. You will recall that most of our genome gets shuffled every generation as sister chromosomes undergo recombination. After foreign DNA enters a population random recombination events that occur every generation fragment the foreign DNA. The longer the DNA has been in a population the shorter the fragments of foreign DNA become. The AIMs SNPs can be used to determine the average length of the fragments of foreign (e.g. European) DNA. 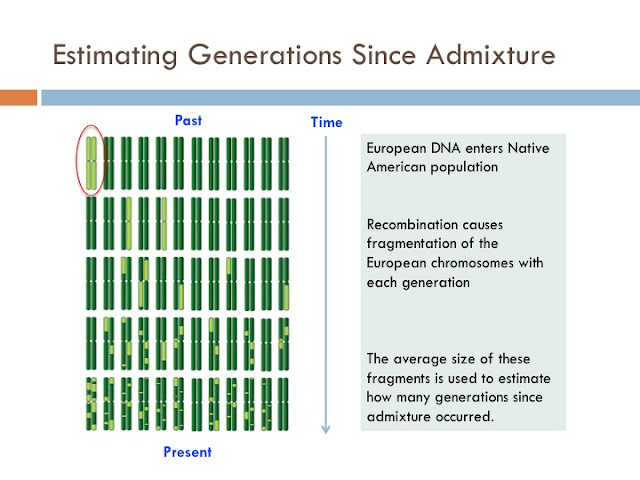 Using this approach scientists were able to determine quite accurately the number of generations since European DNA entered Mexican American populations. In the table below you will observe the estimates they obtained for all 22 chromosomes using two methods (STRUCTURE and ADMIXMAP). They were able to determine that the European DNA in 24 Mexican Americans originated within the last 10-25 generations. The average for all the chromosomes was 16 generations using the STRUCTURE method and 13 using the ADMIXMAP approach. These estimates align well with the known history of European admixture with Native American populations within the last 500 years. 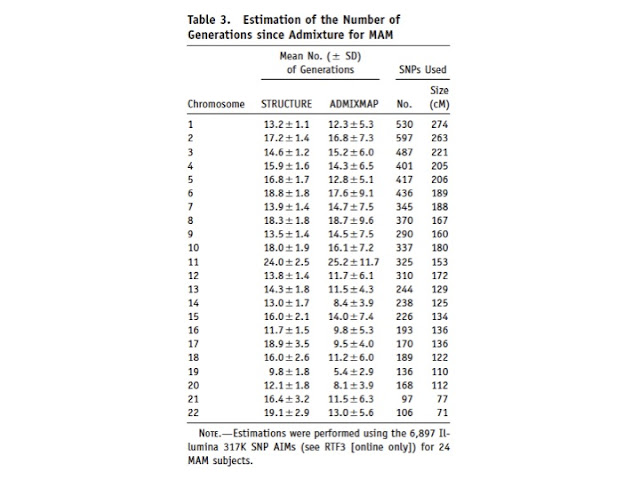 Middle Eastern DNA is relatively closely related to European DNA and they are likely to share many AIMs. Consequently if there was Middle Eastern DNA it would have been possible to detected it with the European AIMs. If these individuals had Middle Eastern DNA in their genomes that arrived over the last 2-3,000 years, the scientists would have noticed something unexpected in the results. Having been through up to 6 times as many generations of recombination this DNA would have caused the estimates of the number of generations since admixture to be larger.

About a decade ago I made the following observation.

"In 600 BC there were probably several million American Indians living in the Americas. If a small group of Israelites, say less than thirty, entered such a massive native population, it would be very hard to detect their genes today. However, such a scenario does not square with what the Book of Mormon plainly states and with what the prophets have taught for 175 years. The Book of Mormon records that soon after their arrival in the Americas, the descendants of Lehi “multiplied exceedingly and spread upon the face of the land” (Jarom 1:8). By about 46 BC, after which time they had joined with the Mulekites, they had multiplied until they “covered the face of the whole earth, from the sea south to the sea north, from the sea west to the sea east (Hel. 3:8). By the time of the final conflagrations around 400 AD, the Israelite populations numbered in the many hundreds of thousands if not millions. There is not a single mention in the text of groups of people living in ancient America, other than the Jaredites, Lehites and Mulekites. All three population groups had very large populations. It is hardly surprising then that Joseph Smith and all other church leaders have regarded Native Americans to be the descendants of the Lamanites. The God speaking to Joseph Smith in 1830-31 referred to the “borders of the Lamanites” when talking about missionaries being sent to teach Native Americans who had been relocated to Missouri (D&C 28: 9; 54: 8).

Mesoamerican apologist Daniel Peterson immediately seized on the bolded portion of my statement, proclaiming widely in apologetic circles that Southerton has conceded that DNA is unlikely to ever be able to detect Lehite DNA. My comment was a reasonable observation at the time (2006) given the limitations of the mitochondrial and Y-DNA studies, but it is no longer correct.

Let's suspend disbelief for a moment and consider that the apologist are on to something, and all the prophets have been misguided. Lehi and his small band colonize a restricted region of the Americas. The Book of Mormon records that  Lehi's descendants multiplied exceedingly and spread upon the face of the land. Their Middle Eastern nuclear DNA would have spread, over the last 3,000 years, throughout adjacent populations like a drop of ink in a bucket of water. At the very least their genes would have spread over many hundreds of kilometres. It would be exceedingly unlikely that their genomic DNA would go extinct and scientists exploring the genomes of Native Americans would stumble on it if it was there. But apparently the Lamanite generation, along with their genes, are nowhere to be found beyond the pages of the Book of Mormon.

Posted by Simon Southerton at 02:47